Isaan is the Thai name for the bulge of north-east Thailand which borders – and has historical and cultural connections with – Laos and Cambodia. In this respect, Isaan is claimed as the heartland of the Thai kingdom. Nevertheless, the region hosts only a fraction of the tourists received by Bangkok, the beaches of the south, or Chiang Mai and the forests of the north-west. Which is exactly why exploring this region is so refreshing. Here are some of Isaan’s highlights.

1: The landscapes along the Mekong River and Nong Khai are breathtaking 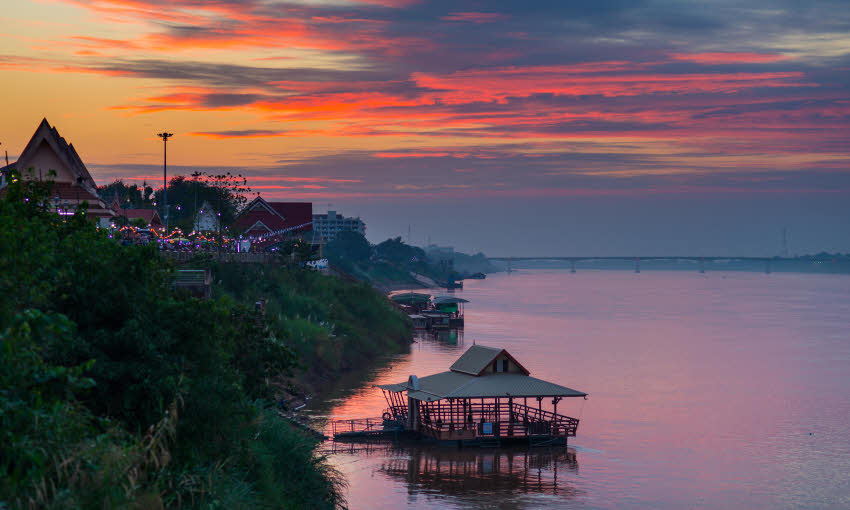 Sit on the water-worn stone steps that descend into the wide, languidly-flowing Mekong and it becomes obvious why the great river is such a powerful draw. Nong Khai stands on the river’s south bank, looking across to Laos. As dusk falls the currents turn pink and rusty in almost impossibly romantic scenes. In the far distance, near the opposite side, you might spot a string of rice barges poled by silhouetted pin-figures and easing along in slow motion.

Currents of trade flow across the Thai-Laos Friendship Bridge, a couple of kilometres upstream from Nong Khai. The city was once part of the Vientiane kingdom and many travellers make a day visit to Vientiane city, the capital of modern Laos, just 25 kilometres away. For others, Nong Khai is the place to start exploring Isaan and a culture evolved from Thai, Lao and Khmer roots. 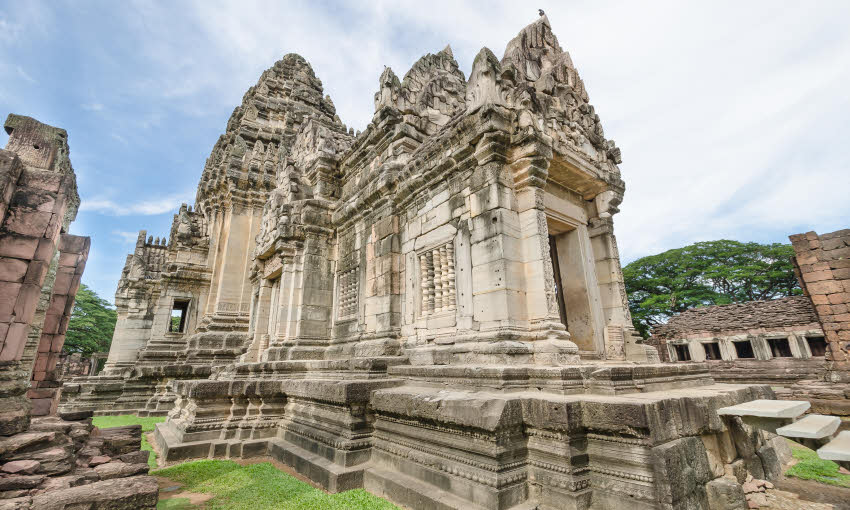 Travellers attentive to the past find Isaan rich in ancient history. Extremely ancient, in the case of Ban Chiang, a UNESCO World Heritage Site now recognised as one of the foremost archaeological sites anywhere in South-East Asia despite having only been discovered in 1966. That was the year when a young anthropology student accidentally stumbled on the rim of a buried jar. It turned out to be one of literally millions of pieces of pottery and other artefacts, the oldest dating back to 3600 BC.

Archaeologists from all over the world descended on this neglected backwater as the pre-history of the region was re-appraised. Near the area where archaeological digs continue to unearth treasures from civilisations spanning thousands of years, stands the Ban Chiang National Museum displaying finds ranging from primitive metal tools to fine-worked ornaments and pottery painted in a burnt-ochre swirling design not, hitherto, found anywhere else.

Further south, near the Cambodian border, the past is etched on the landscape in the form of 1,000-year-old Khmer ruins. A climax comes in the 11th-century temple of Phimai, which pre-dates parts of the renowned Angkor temple complex in Cambodia, with which it was joined by road at the height of the Khmer empire. Wander among the eerie, carved sandstone figures, monolithic lintels and the towering main shrine. In one of the greatest ancient monuments in South-East Asia, you might find that your only fellow visitors are a few Buddhist monks floating about like saffron-robed spectres.

3: It's home to a world-class national park and Thailand's first 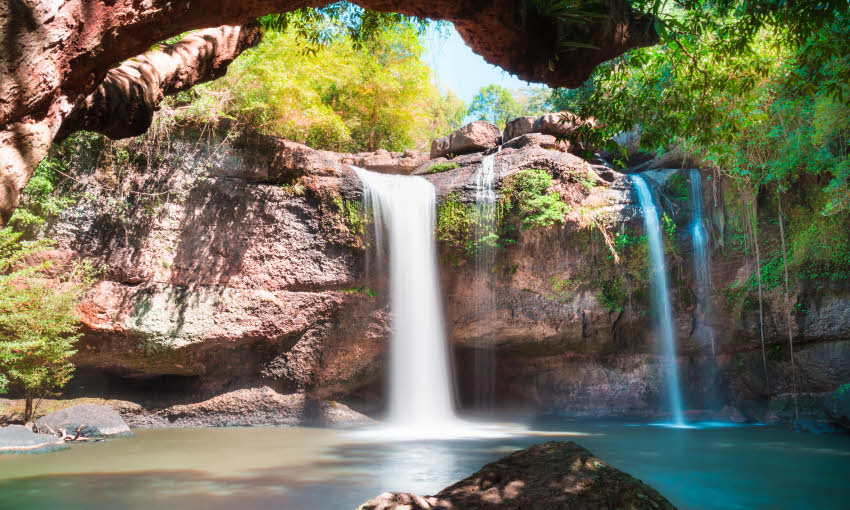 Khao Yai, a wild area of forested mountains down in the south of Isaan region was, in 1962, chosen as Thailand’s first national park. Nowadays, it is rated by many as one of the great national parks of the world. The allure is partly the stunning scenery, partly the astonishingly diverse wildlife.

Khao Rom, the highest peak in the park, rises to 1351 metres while towards the horizon limestone hills are draped in vegetation like tresses of dark green hair. There are trails under the forest canopy to thunderous waterfalls cascading into cool clear pools. (Fans of the 2000 film The Beach might recognise the sublimely beautiful Nam Tok Haew Suwat falls).

Wild elephants sometimes wander across roads through the park, or from the seclusion of observation towers you can watch them drinking at salt licks. Gibbons swing in the branches and loops of liana; there are deer, crocodiles, pythons and more than 300 bird species including several rare hornbills. And, it is whispered sotto voce, perhaps 25-30 tigers though their location is secret and sightings are vanishingly rare.

4: It has a maze of treasure trails that wait to be explored 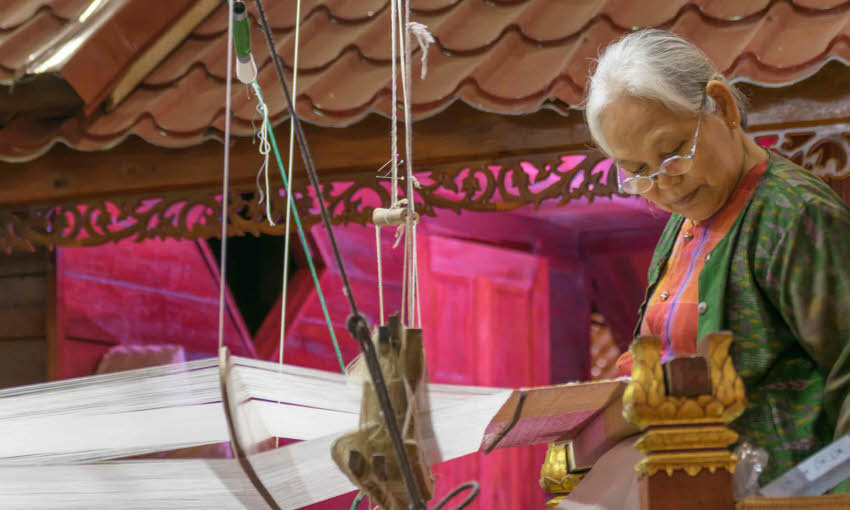 Even people for whom ceramics and handicrafts are of only passing interest, find themselves captivated by the exquisite creations produced by local communities in out-of-the-way towns and villages across Isaan.

The plantations of silkworm-sustaining mulberry trees spread out across Khon Kaen province are an example. At villages such as Chonnabot, women sit weaving in the shade of wooden huts raised on stilts, the click of shuttles on looms beating metronomic rhythms as they weave mat-mii. This is a technique, originally Loatian but highly prized in Thailand, of making exquisite multi-coloured silk cloth from threads which have previously been tie-dyed.

Another example is Dan Kwian, a village on a narrows of Mekong tributary the River Mun has been the source of a singular style of rough-textured pottery for centuries. It is made of fired clay from the banks of the river, and is for sale in a dazzling variety of styles – each workshop and stall offering something different.

Seeking an authentic elephant experience? Look no further than these responsible elephant sanctuaries that offer a natural and ethical way to see these incredible gentle giants...

Your ultimate guide to homestays in Thailand, with 7 of the best to stay in

Homestays are a great way to pay something back into local communities and get an authentic feel for local life. Emma Higgins has the lowdown on why you might want to consider a homestay for your next Thailand adventure, along with a few favourites