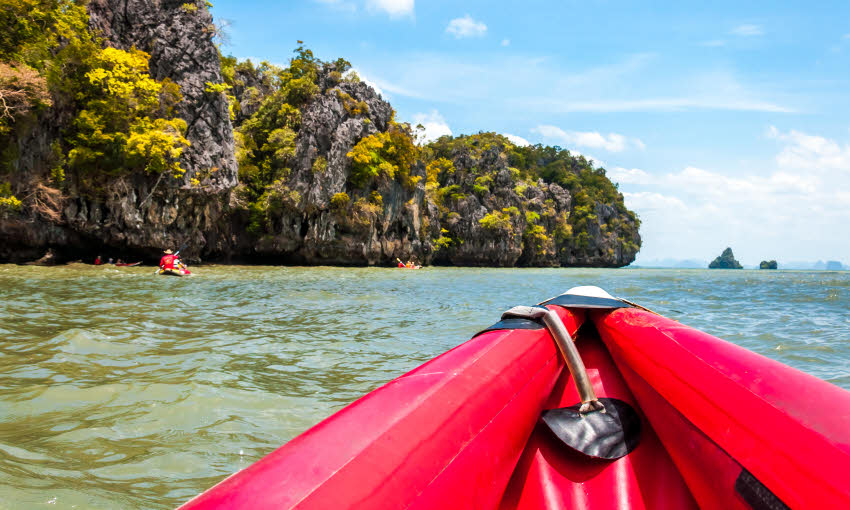 Phang Nga Bay, James Bond fans may remember, is where much of The Man with the Golden Gun was filmed. The seascape is strewn with jungle-clad limestone shapes pointing skywards out of emerald water, some of them reaching 300 sheer metres. As your boat sails across the bay from Phuket, the rocks seem to change shape adopting bizarre attitudes. The sheer monolith of Koh Tapu was 007 island itself, while others have older, more descriptive names such as Koh Ma Chu (Little Dog Island) and Koh Khai (Egg Island).

The islands, which are reached from sea kayaks launched from a larger boat, are pitted with caves, and lagoons where limestone roofs have collapsed. Exploring the interior of uninhabited Koh Phnak involves paddling along 50 metres of dark, seeping passages, in places lying flat on your back to avoid stalactites just inches from your face.

You emerge into bright sunlight and the hum of insects and splash of mud-skippers. Monkeys hoot as they crash about in the undergrowth. Jungle mountainsides rise high above, as you paddle through mangrove trees growing out of shallow, green-tinted water, trying to avoid large, white, circling jelly fish. Most thrilling of all is the notion that the inaccessible virgin jungles above have quite possibly never been explored. 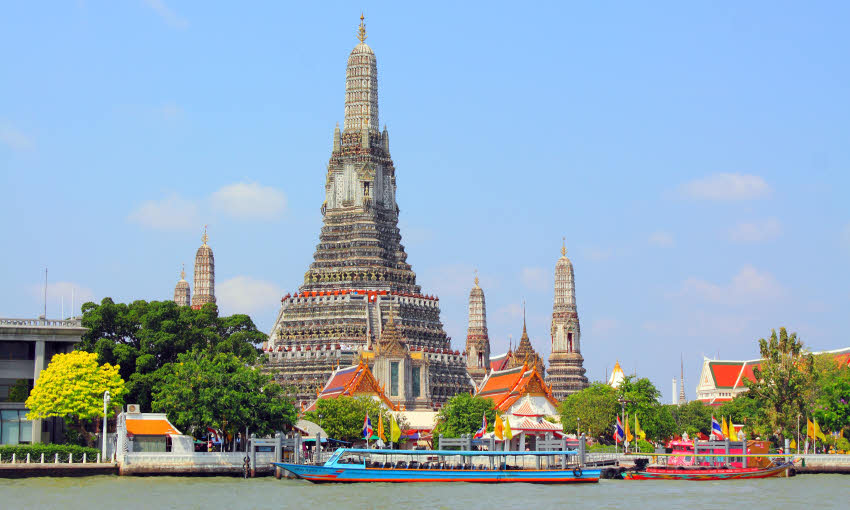 For centuries people have lived along the banks of the Chao Phraya River, Thailand’s major river which flows through Bangkok before spilling into the Gulf of Thailand. Likewise its tributaries and connected klongs (canals) many of which date centuries back to the Khmer Empire. Consequently, a trip up the river that powered a backwater settlement towards becoming the national capital, explores outlying neighbourhoods of Bangkok and traditional villages beyond.

In addition to major cultural sites such as the magnificent ‘Temple of the Dawn’ (officially named Wat Arun) a trip on the Chao Phraya with Anantara rises above the mainstream, making stops to experience lesser-known folk traditions, such as drum-making skills at Ekkarat village. Beyond the tourist-crowded floating markets visited by so many, there is Bang Nam Pheung, known as the ‘green lung of Bangkok’. This vegetation-draped loop of the Chao Phraya hides a real local market where villagers barter and shop and there is exquisite food to try from myriad stalls.

3: Journey to the remote Andaman Islands by catamaran 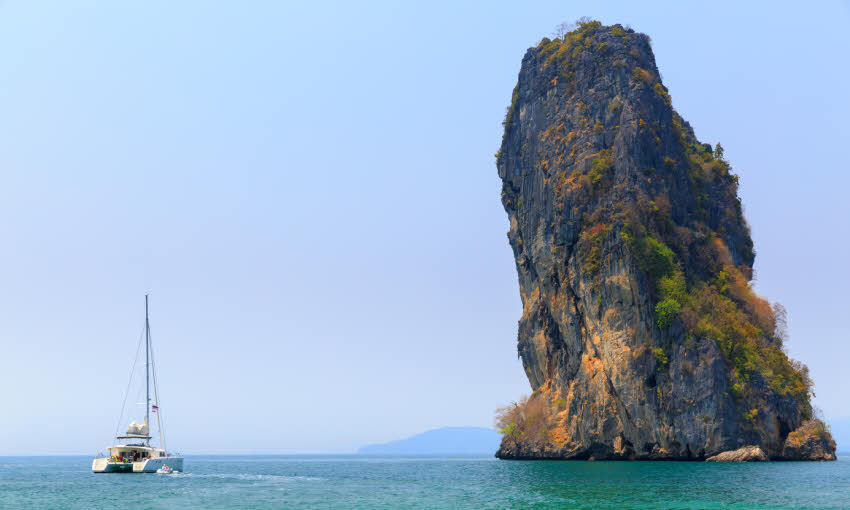 Sail around the Andaman Islands (Dreamstime)

Far from the bright lights of Phuket from where you start, there are hundreds of dazzling islands – thousands if you count all the islets and outcrops – scattered across the glittering Andaman Sea. A multi-day voyage on a liveaboard catamaran operated by adventure company G Adventures, takes you to some of the furthest flung and intriguing of these.

For marine environment enthusiasts, a highlight is the Mu Koh Lanta Marine Park – especially the five islands which comprise Koh Haa. If you are a diver, or even snorkeller, there are explosions of trumpet fish and glowing squid to swim through. You might spot hawksbill turtles and schools of barracuda, or with an expert guide explore caves where banded sea snakes sometimes lurk. Then land at remote coves that conjure up paradise island reveries as you skim over shall water as clear as a paperweight embedded with shells and pebbles. 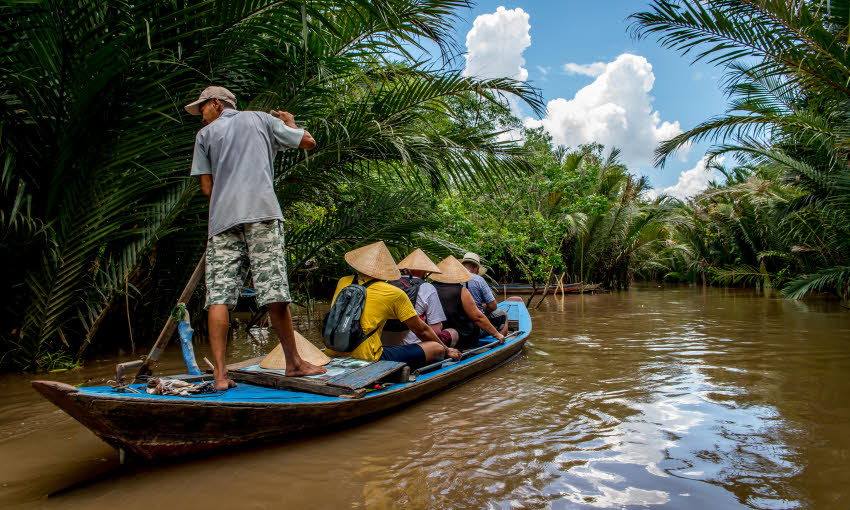 Cruise along the Mekong River (Dreamstime)

The secret to unveiling the mysteries of one of Asia’s most intriguing rivers, is to relax and slow down to its own languid pace. The Mekong rises from the melting snows of the Tibetan plateau and snakes south through the forests of south-west China. Swelling to a kilometre wide it acts as Burma’s natural border with China, then with Laos before swinging east to take up frontier duty again between Laos and Thailand.

Chiang Saen, on the Thai side, is where you join one of the locally-styled, luxuriously fitted boats belonging to specialist river cruising company Mekong Kingdoms. Spend a few days journeying through the ancient kingdoms of Lan Xang and Lanna. Watch the changing moods of the river, between shore excursions to villages on both the Thai and Laos sides. In the evenings, as the setting sun guides the way with a golden path and you sip a cold drink on the deck, it is not hard to conclude that sailing the Mekong is about as relaxed as life gets.

5: Cook up a feast on the River Kwai 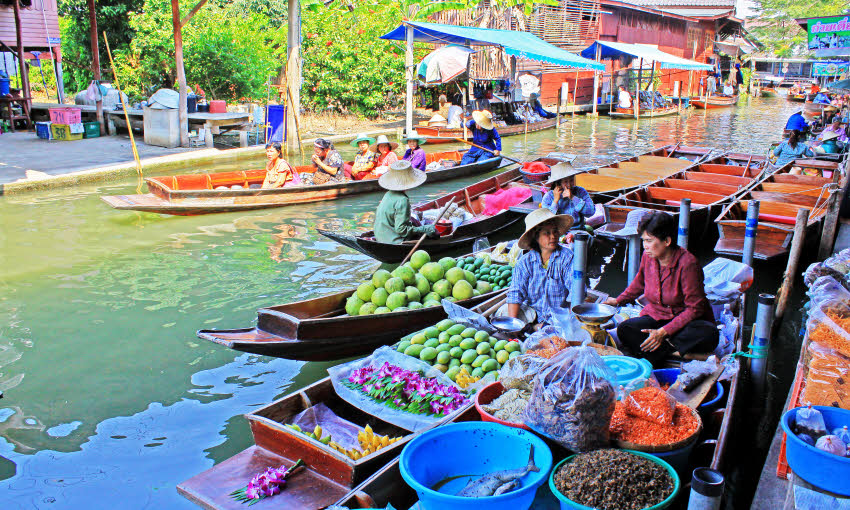 Possibly it is the idea of a 'Fridge on the River Kwai' which has inspired the operators of the iconic Eastern and Oriental Express train, to introduce a new 'floating cookery class' on that renowned river. On the third day of a swing through South-East Asia starting in Bangkok, guests reach Kanchanaburi on the River Kwai, and the famous bridge of POW infamy and 1957 movie. The culinary tour kicks off with a morning visit to a floating market in search of spices, meat, vegetables and other ingredients offered from canoes. Next, they board a river raft to sail along the Kwai while learning to prepare the traditional Thai dishes that will become their water-borne lunch.

Seeking an authentic elephant experience? Look no further than these responsible elephant sanctuaries that offer a natural and ethical way to see these incredible gentle giants...

7 agrotourism projects to visit in Thailand