9 of the best cycling routes in Thailand

Thailand is a fantastic destination for cyclists, whether it's the winding coastal roads or the narrow hilly tracks, which are attracting a growing number of the world's top mountain bikers. Here are the best spots for anyone considering a two-wheeled exploration of this beautiful country... 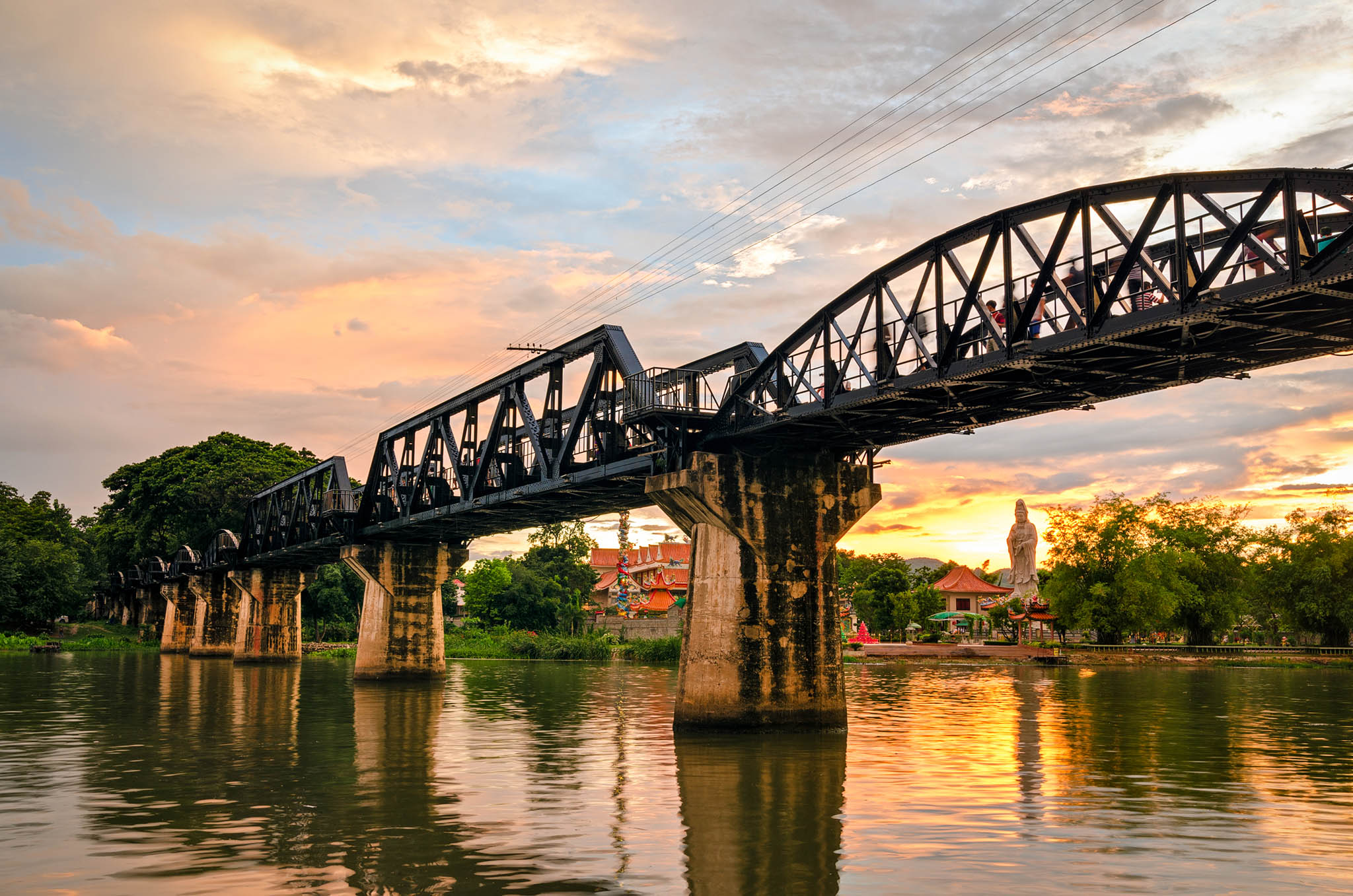 This beautiful province is famous for the Hellfire Pass and the Bridge over the River Kwai, built by allied prisoners of war during WWII. It’s packed with ornate temples – don't miss the beautiful Khmer ruins of Muang Singh – and huge caves, and those who cycle up its forested hills will be rewarded with spectacular views. Most of the cycling here takes place on rural trails and unsealed roads, which is why it's best to opt for mountain bikes over road bikes when exploring this rugged, beautiful part of Thailand. You'll also be able to give weary legs a rest by riding one of the few sections of the Death Railway still in operation. 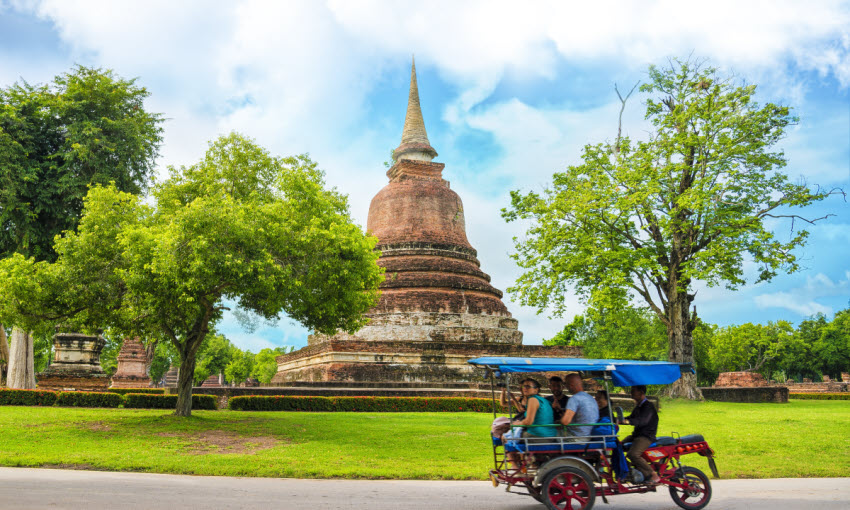 The rural trails used by local farmers make ideal bike paths for cyclists keen to explore the 13th-century town of Sukhothai. Many of them wind alongside ancient canals and skirt the area's lush paddy fields, although Sukhothai Historical Park, with its abundance of historical ruins, should hold the top spot on any itinerary. “This UNESCO World Heritage site offers more than 193 ruins, and it’s surrounded by three moats and bridged by four gateways,” says Will Shoubridge at SpiceRoads, a tour operator specialising in bike tours. “It’s split into five zones, so travellers can easily appreciate the site by bike at a leisurely pace.” 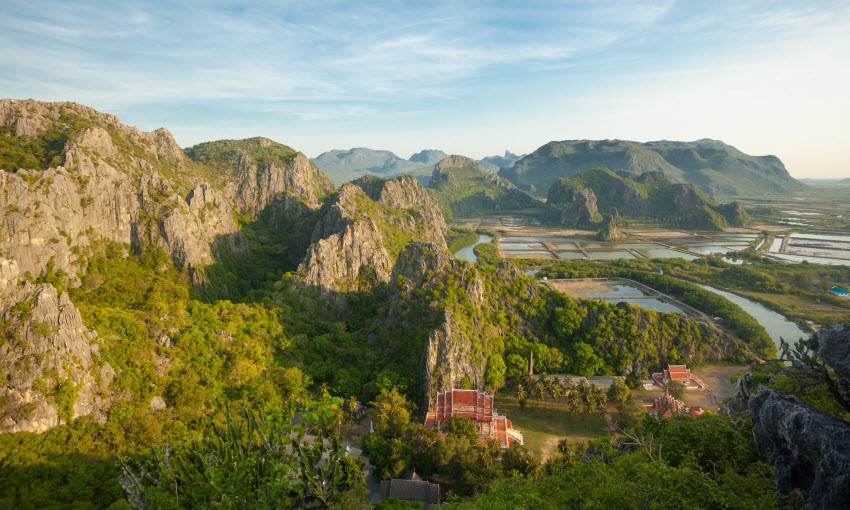 Khao Sam Roi Yot's location, south of the popular tourist spot of Hua Hin, makes it an ideal add-on to a longer trip. Although, a word of warning: Khao Sam Roi Yot means "mountain of 300 peaks", so be prepared for some serious pedalling, especially if you venture inland. Cyclists come here for the deserted beach roads which snake along the coastline, and the towering limestone cliffs, which provide plenty of photo opportunities. Essential stop-offs include the Phraya Nakhon cave (made from two sinkholes, and home to a pavilion built for the visit of King Rama V in 1890) and the Khao Daeng Viewpoint, for its breathtaking views over the park. 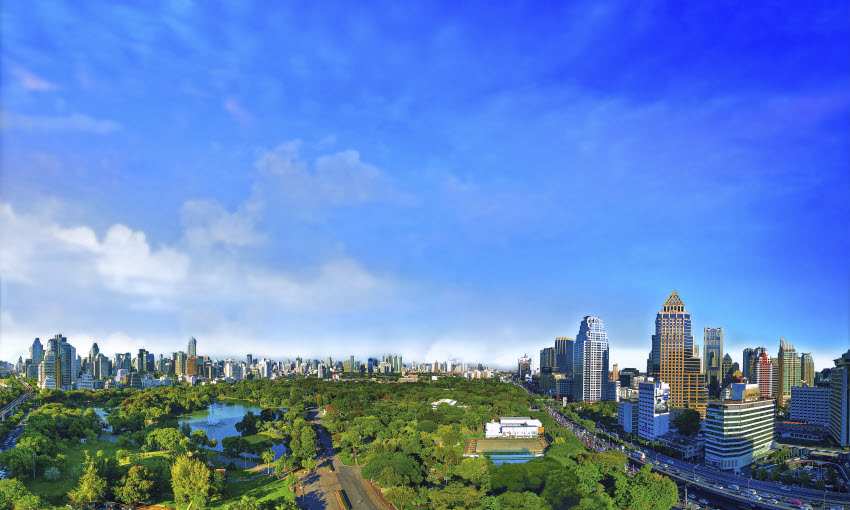 Head to Bangkok's beautiful Lumphini Park to cycle past huge, boggly-eyed monitor lizards and elderly locals practising their tai chi as the sun comes up. Pick up your wheels from one of the bike share stations on the edge of the park. If you fancy venturing further afield, aim for the elevated walkway and cycle path which connects Sarasin Road, at the top of Lumpini Park, to Benjakiti Park, a couple of kilometres away. The latter’s centrepiece is the beautiful lake, surrounded by a wide, smooth cycle path. When hunger strikes, stop at one of the food stalls for some noodles, washed down with freshly-squeezed orange juice. 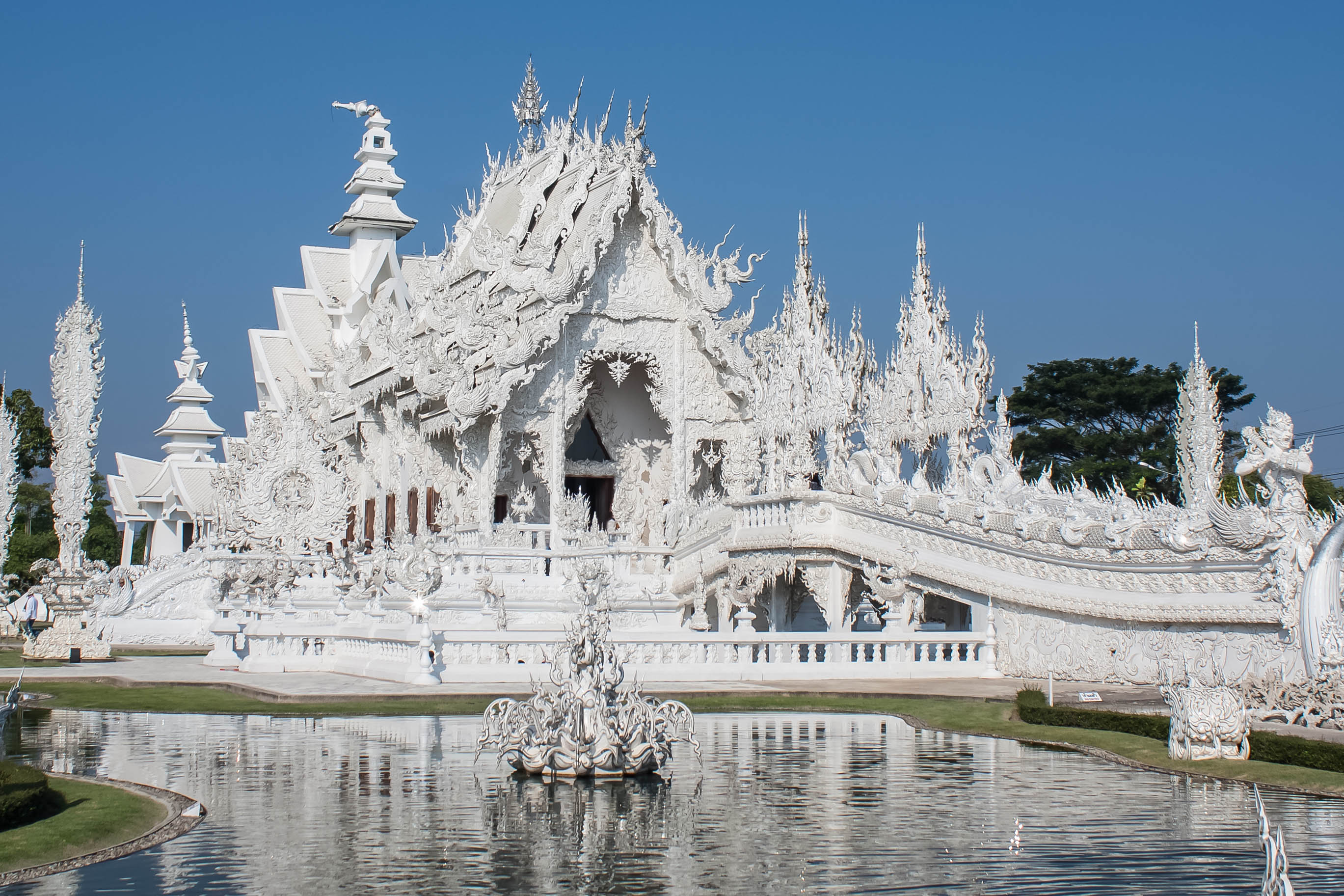 The landscape around the city of Chiang Rai is a popular cycling destination, and one of the most well known attractions is Wat Rong Khun (otherwise known as the White Temple), famous for its sparkling appearance – the result of tiny pieces of glass embedded in the bright white plaster. "To avoid the traffic heading to this famous site, cyclists can pedal for 15 kilometres along a route which follows the Mae Lao River through peaceful paddy fields," points out Will Shoubridge at SpiceRoads. 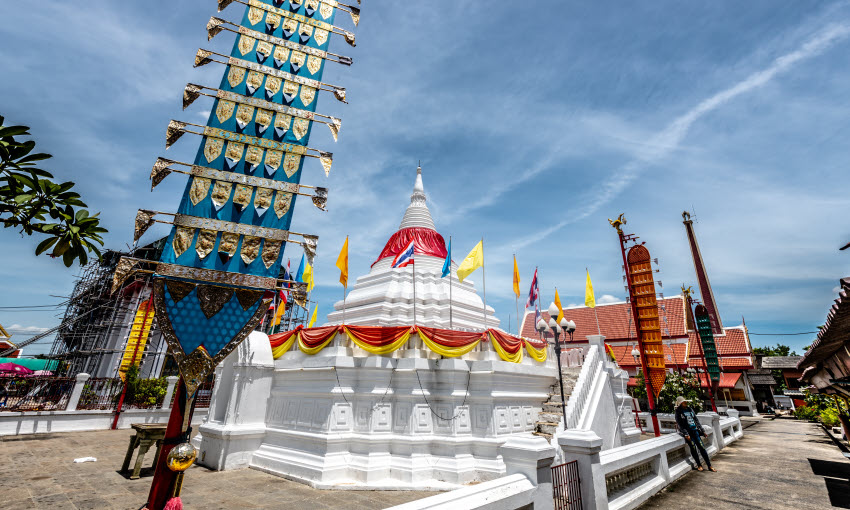 In 1722, Ko Kret, just 20 kilometres north of Bangkok, became an island when it was cut from an ox bow in the Chao Phraya River. Today, it's a great place for nervous cyclists, thanks to the smooth, flat concrete trails which weave across it. You'll be able to rent a bike for an entire day for around ฿40 (92p). A cycle from Bangkok to Ko Kret is a great way to glimpse local life - you'll pass markets, rice paddies and fruit plantations, and cars are banned from the island itself, making it one of Thailand's safest cycling spots. It's a wonderful place to pick up souvenirs, too – Ko Kret has always been inhabited by the Mon people, known for their pottery craftsmanship, and there are plenty of opportunities to pick up their beautiful earthenware products. 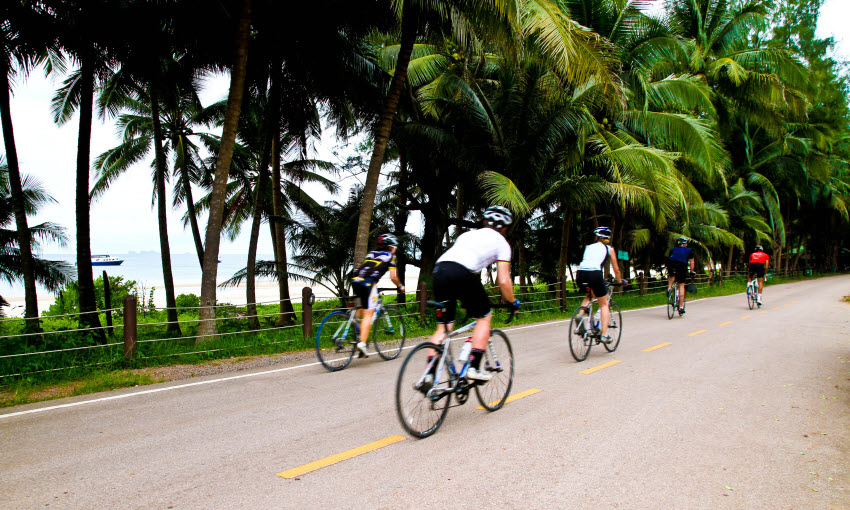 Start a two-wheeled exploration of Khao Lak by cycling over the Sarasin Bridge, which connects the northern tip of Phuket Island to the mainland. You'll cycle mainly on narrow country roads, although traffic is light, making this a fantastic cycling destination. We recommend setting your sights on Thai Mueang, with its beachfront restaurants and turtle-dotted bays (wildlife fans should consider a visit to the Thai Muang Turtle Sanctuary), before heading on to Ton Prai Waterfall, where you can cool off with a dip in the sparkling water. ”This beautifully peaceful stretch of coastline with white sandy beaches hugged by tropical forests makes a welcome finale for cyclists riding down the tail of Thailand," points out Will Shoubridge at SpiceRoads. 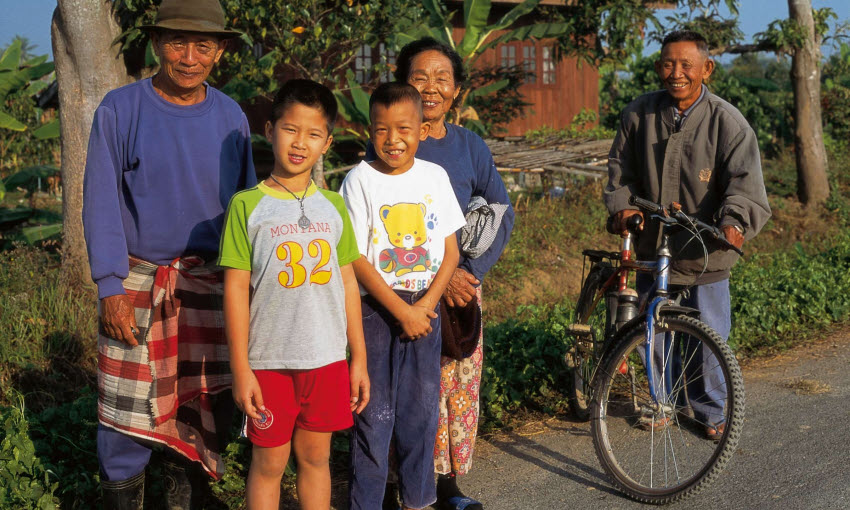 There's something for cyclists of all abilities in Chiang Mai, which is quickly becoming Thailand's most popular cycling spot. Hardcore cyclists can cycle to the top of Doi Inthanon, the highest point in Thailand, and 2,200 cyclists recently did exactly this as part of an organised bike race. With its hilly, challenging terrain, it's not hard to see the area's appeal - or why Asia's top cycling teams head here to train, pedalling past orange-robed monks on lung-busting early morning rides. Chiang Mai's Old City is a particularly great spot - cycle between the four gates, via the Buddhist temples you'll find en route. 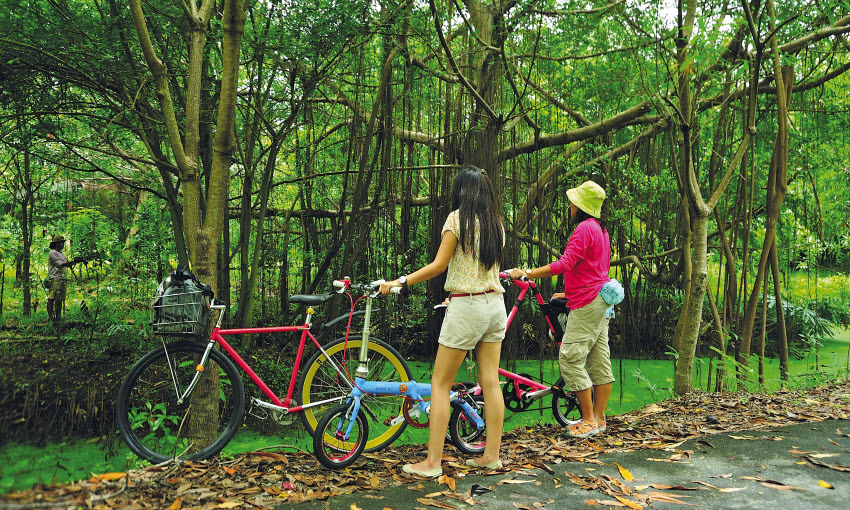 Known as Bangkok's green lung, Bang Krachao is a small artificial island to the south of Bangkok. Although the terrain isn't particularly taxing, you'll need a good sense of balance because the trails which criss-cross this island are frighteningly thin. But don't be put off – the pathways connect a wide range of fascinating sights, including the Bangnamphueng Floating Market, nine Buddhist temples and Sri Nakhon Khuean Khan Park and Botanical Garden.

Looking for ways to reduce your pollution footprint on your travels? From ditching plastics and exploring by foot, to volunteer beach cleans and staying in eco-lodges, follow these simple but effective steps to become a responsible traveller through Thailand...

Venture to Thailand's Ko Surin islands for an up-close and personal encounter with the Chao Ley (sea gypsy) community. From fishing on traditional Moken boats to a family homestay by the beach shore, learn the life of the 'people of the sea'...